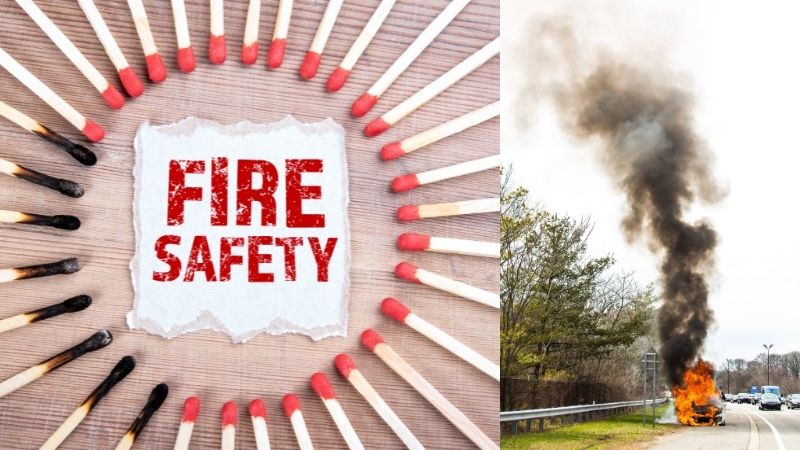 After the recent fire incidents with Ola Electric, Okinawa and Pure EV electric 2Ws, everyone is wondering why are Lithium-ion batteries catching fire?

Lithium-ion batteries are classified under the dangerous goods category. In this article, Rahul Bollini explains the multiple reasons an EV battery pack can catch fire and a few tips for the nascent Indian EV industry to get the battery safety issues under control.

A Lithium-ion battery pack comprises of multiple Lithium-ion cells in series and parallel arrangement to achieve the required voltage and capacity. A Lithium-ion cell catching fire is termed as a thermal runaway in technical terms. Thermal runaway is caused by a chemical reaction that has a ripple effect inside the cell and results in fire. It is the nature of Lithium-ion cell chemistries such as NMC (Lithium Nickel Manganese Cobalt Oxide) and NCA (Lithium Nickel Cobalt Aluminium Oxide). This reaction is very difficult to stop once it has begun. It begins when the cell reaches high temperatures leading to an internal chemical reaction, which further increases the heat generation and the next thing we know there is smoke and fire coming from the cell. The chemical reaction leads all of the energy of the cell being released at the same time and all this happens in a very short period of time.

Let us discuss the reasons that lead to thermal runaway:

Physical damage can lead to an alteration in the internal structure of the Lithium-ion cell. When the structure changes internally, the cell can no longer be expected to perform normally and it is a matter of time the cell will short circuit. This could also be caused by external mechanical vibrations.

Improper heat management: No batteries are perfect when it comes to charge-discharge efficiency. There will always be efficiency losses and the losses are more during fast charging and high-power discharge. The energy loss is in the form of heat. This heat needs to be carefully managed and the cells should not be exposed to heat for too long. Long term effects of exposing the cells regularly to high temperatures include faster degradation of the cell’s capacity. Moreover, if the cells are exposed to higher temperatures, the cells should not function anymore (charge or discharge) and it is the duty of the BMS to cut-off the battery operation. BMS failing to cut-off the battery at this instance can quickly accelerate thermal runaway of the cells. BTMS (battery thermal management system) is a good way to tackle this. But most electric 2W have no thermal management and hence electric 2W are seeing higher number of fire incidents compared to other vehicle segments. The cells in these battery packs are very tightly packed leaving no breathing space. BTMS is an emerging field and needs more R&D focus.

Overcharging: This is another area where the BMS should function properly, hence battery pack companies must use reliable BMS that don’t fail on the field. Most low cost BMS in the market come with one year warranty and they fail after the warranty period. It is the duty of the BMS to perform the basic functions such as overcharge protection, undervoltage protection, continuous current, over current detection and over-temperature protection. BMS failure can mean one of the two scenarios. The BMS will cut-off the battery pack functioning and then the battery pack has to be serviced. The BMS can also, in rare cases, not cut-off the battery pack functioning. During this scenario, if the battery is being charged, it will overcharge and can catch fire. Overcharging means charging the battery more than its limit and it can rapidly elevate a chain reaction inside the cell. Another reason why some a BMS fails is due to its inability to handle regenerative energy coming back from the electric motor. This is very common in electric 2W using universal controllers that have the ability to handle 48V and 60V. The reverse energy is unregulated and slowly damages the BMS over time.

When the battery is still being used in the EV application beyond its end-of-life, the higher internal resistance will generate high amount of energy losses in the form of heat during charging and during high-power discharge. In this case, the battery constantly experiences high amounts of heat and it can lead to constant battery cut-offs from the BMS due to the overtemperature cut-off function. Constant cut-offs can lead to longer charging times and the vehicle turning off constantly during driving. In a rare case scenario, it can also lead to thermal runaway.

In fact, I have seen some mass manufacturing companies having up to 9 varieties of B grade cells from B1 to B9. On the other hand, some companies simply grade it as A grade, A minus grade and B grade. Just think of the combinations of cells that fit in the above categories and imagine them working with each other. It cannot get any non-uniform than this and leads to heat generation.

As discussed in the earlier sections, cells constantly experiencing high temperatures, can lead to constant battery cut-offs and in rare cases lead to thermal runaway. Another form of B grade cells are refurbished cells. These cells previously had higher capacity in terms of mAh and they have reached their end-of-life. They are dismantled from the battery pack and sold as a new cell with lower capacity. It has a new PVC cover and looks shiny and new. There is no way to verify from where the cells are coming since they are not made in India. These cells are definitely not fit for EV applications.

In a nutshell, here are some tips to avoid thermal runaway from Lithium-ion cells:

1. Avoid physical damages to the battery.

2. Explore basic BTMS options and not to forget that India’s climate is hotter than other countries that are seeing high rates of EV adoption.

3. Use a good and reliable BMS that has branded MOSFETs and ICs and validate it well before deploying it in a large number of battery packs.

4. Recall the EV battery packs at the end-of-life period.

5. Use A grade cells for EV applications.

Rahul Bollini is an independent R&D consultant in the field of Lithium- ion cells and batteries with 7 years of industry experience. The author can be reached at bollinienergy@gmail.com and +91 72049 57389.