A high-voltage electric battery in HEV/EVs is used to power the traction inverter and other high-voltage loads such as the AC compressor. To connect the battery to the loads, the battery power lines are routed through electronically controlled, high-voltage switches called contactors. 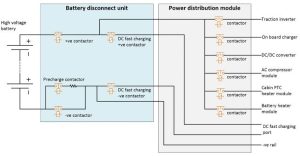 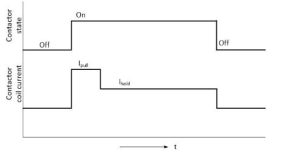 The current PWM controllers feature a simple yet effective control architecture. With only eight pins, the UC2843A-Q1 and UCC28C43-Q1 can drive MOSFET gates directly. Furthermore, these industry-proven devices offer a flexible and scalable controller solution for the high-voltage to low-voltage conversion and can also support wide-input range applications. Figure 3 shows a circuit concept for an economizer with the PWM controller.

The LED drivers are fixed-frequency current regulators and hence integrate the current control feature. Both the TPS92691-Q1 and TPS92692-Q1 have an input pin that is used to set the current set point. Further, the TPS92692-Q1 integrates spread spectrum which helps with EMI mitigation. Figure 4 shows a circuit concept for economizer with a LED driver. 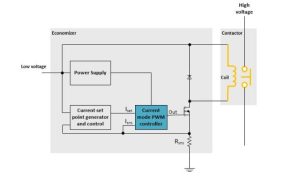 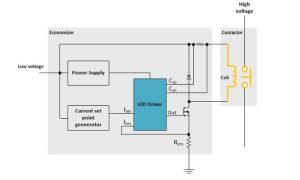 The economizers in Figure 3 and Figure 4 also include power supply and current set point generator blocks. These blocks can be easily realized by using Texas Instruments wide portfolio of LDOs, analog multiplexers, operational amplifiers and comparators.