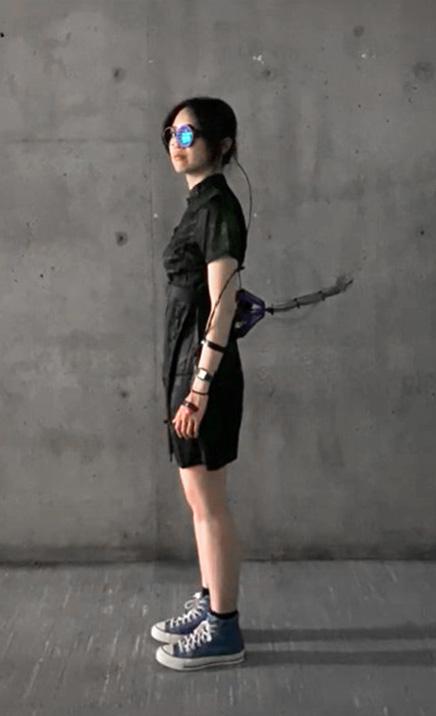 This project lets you experience life with a cybernetic tail

Modern humans have forgone their tails in favor of walking upright, and this fact left maker Pengfei Zhang wondering what it would be like to have such an appendage. From this idea, she along with Sarvenaz Sardari and Xi Peng created the Cyber Tail, which integrates embedded electronics into a small device that moves with its wearer.

The Cyber Tail’s design revolves around a central base that houses a set of four servo motors. In order to move the tail in various directions, each servo motor can either pull or release a single string, which causes the tail itself to bend, akin to how a finger works except in four possible directions. The Arduino Uno controlling these motions relies on an external IR sensor within a pair of glasses that detects whenever the user blinks.

If a blink is recognized, two of the servo motors move in opposite directions to bend the tail in a particular way, and if a blink is not present, then they move in the other direction. Lastly, the MPU-6050’s accelerometer is read and used to compute the angles for the other two servo motors that also bend the tail. Put together, these three steps allow the Cyber Tail to move in a myriad of different ways.

About 25 million years ago, our ancestors lost their tails during the evolution, to better adapt the the environment. As we are now living in the digital age, our bodies are evolving together with the cyber world. What would a cybernetic tail bring to our daily life?

For more information on this project, be sure to read the team’s write-up here on Instructables or watch their video below!

A DIY Hovercraft based on Arduino Nano – Open Electronics

A computer with Raspberry Pi that looks like it came out of a war...