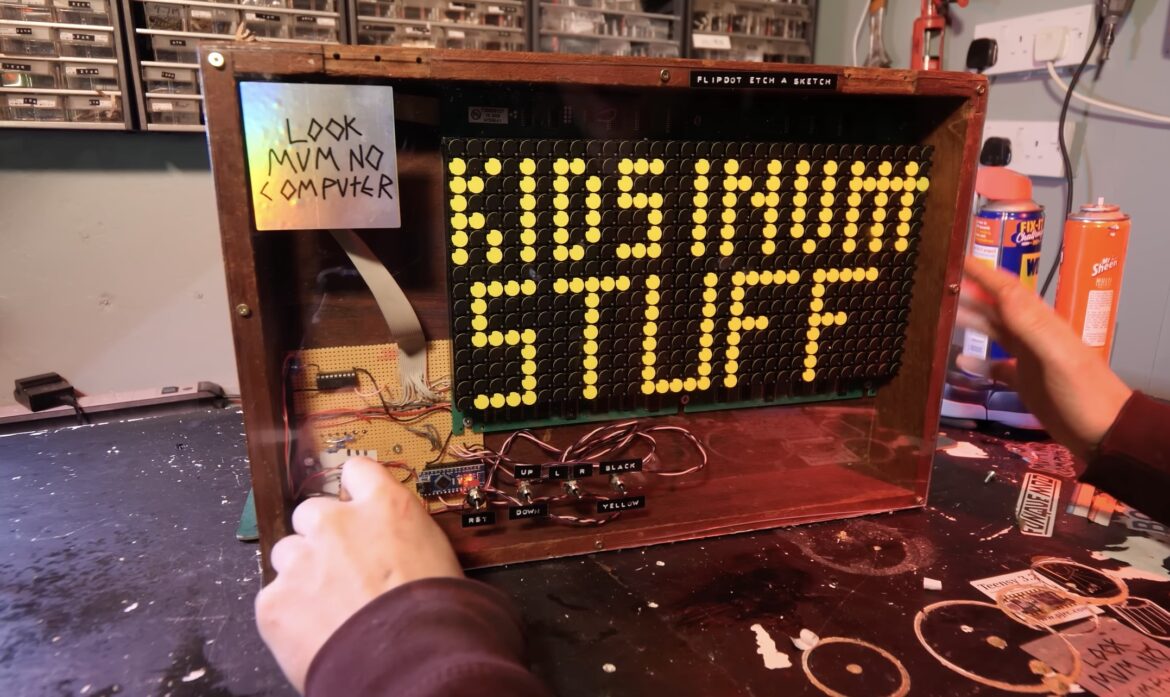 This flip-dot display acts like an Etch A Sketch

Every year, several of the biggest names in the maker world on YouTube get together for an international Secret Santa exchange. Each participate gets to decide on a gift for the assigned recipient and the only rule is that they must make the gift themselves. Sam Battle, of the LOOK MUM NO COMPUTER YouTube channel, crafted this awesome flip-dot display Etch A Sketch for Ruth and Shawn of KidsInventStuff.

Flip-dot displays used to be common for bus-mounted route readouts and ETAs in airport terminals, as they are reconfigurable and very readable at a distance. But the low cost and ubiquity of large LCD, OLED, and plasma screens made them obsolete over the last couple of decades. Few companies still manufacturer them and so Battle had to use a vintage flip-dot display panel. It works using a matrix circuit, like an LED panel. By applying current, one can flip the state of an entire row, entire column, or a single pixel according to polarity and it will remain at the set state.

The same works with potential difference, which is how Battle chose to control his panel. Instead of reversing polarity, he can apply either ground or 10V (relative to 5V) to flip the state. An Arduino Nano controls the state changes through the panel’s built-in multiplexer chips. Battle then connected a few momentary toggle switches to the Arduino that let the user “draw” like they would on an Etch A Sketch toy. They can clear the entire panel, move the “cursor” while setting pixels to yellow, or move the cursor while setting pixels to black.

Battle packaged the panel and control switches in a simple wooden frame with a Plexiglass cover. It is a truly unique gift and one of the most creative uses for a flip-dot display that we’ve come across.