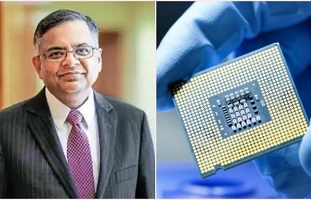 India’s Tata Group will begin producing semiconductors in the country within a few years, a move that the chairman of the group’s main company said will make the South Asian country a key part of global chip supply chains.

In an interview with Nikkei Asia in Tokyo on Thursday, Tata Sons Chairman Natarajan Chandrasekaran revealed that the conglomerate plans to launch new businesses in emerging fields such as electric vehicles.

“We have created Tata Electronics, under which we are going to set up a semiconductor assembly testing business,” Chandrasekaran said, referring to an electronic components manufacturer that the group founded in 2020.

“We will have discussions with multiple players,” the chairman added, raising the possibility of partnerships with existing chip manufacturers. Launching a chipmaking business on its own is a challenge for an inexperienced company.

Semiconductor manufacturers and foundries in the U.S., Japan, Taiwan and South Korea are seen as potential partners. Tata already announced a semiconductor design and development partnership with Renesas Electronics in June.

Chandrasekaran also said Tata will “look into the possibility of eventually launching an upstream chip fabrication platform.” The upstream process of wafer fabrication is more challenging both technologically and financially than the downstream steps of assembly and testing.

Tata’s move into chipmaking will break new ground for India, where the semiconductor market is set to more than double between 2021 and 2026 to $64 billion, according to the India Electronics and Semiconductor Association and others. The country now has virtually no semiconductor industry, other than software-based design, although demand for semiconductor-intensive products such as smartphones and electric vehicles is growing rapidly.

Momentum is building to diversify chip supply chains, which are at present concentrated in East and Southeast Asia, following the global chip shortage and U.S.-China tensions. The ongoing U.S.-China “decoupling” in chip-related technology is  leading major chipmakers to seek more diversified supply-chain locations. Both Tata and the Indian government seek to capitalize on this shift to position the country as a new semiconductor hub.

Chandrasekaran explained that his group has been promoting its “future ready” strategy, in which existing group companies, from steel to arms, adapt to new challenges such as digitization and climate change while also launching new businesses.

Elaborating on the second point, he said the transition involves “preparing them for, number one, the digital world. Second is transition for the future energy, sustainability. The third is transition toward resilience in supply chains.”

As part of that effort, the chairman revealed that the group plans to invest $90 billion over the next five years. In addition to semiconductors, the chairman said the company is in the process of starting new businesses such as the manufacturing of electric vehicles and EV batteries, production of renewable energy and development of “super apps” that allow users to buy goods and services from groceries to financial products.

Venturing into chipmaking could benefit Tata’s core IT and auto businesses, which depend heavily on imported semiconductors. Securing a stable supply has been a particular challenge for the latter. Production and sales in India’s auto industry as a whole both slumped last year amid the global chip shortage.

That will only become a bigger issue for Tata as it pivots to electric vehicles, which require more semiconductors than their counterparts with internal combustion engines. Though Tata Motors’ share of India’s overall passenger-vehicle market stood at less than 20% last fiscal year, it accounts for nearly 90% of EV sales in that space.