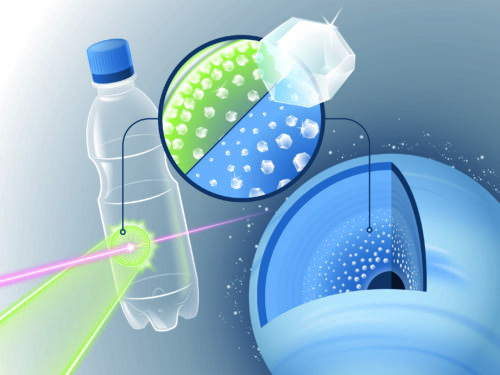 A team of researchers at SLAC National Accelerator Laboratory in California conducted a novel experiment by flashing laser light to simple PET plastic to produce nanodiamonds.

An international team headed by the Helmholtz-Zentrum Dresden-Rossendorf (HZDR), the University of Rostock, and France’s École Polytechnique innovative experiment, shot a laser at a thin film of simple PET plastic and studied how the intensive laser flashes affected plastic. They conducted experiments at the location of the Linac Coherent Light Source (LCLS), an accelerator-based X-ray laser that was used to analyze two measurement methods at the same time: X-ray diffraction to determine nanodiamonds were produced and small-angle scattering to analyze how quickly and large the diamonds grew.

“PET has a good balance between carbon, hydrogen, and oxygen to simulate the activity in ice planets,” Kraus explains. The conditions in the interior of icy giant planets like Neptune and Uranus are temperatures it was difficult to use hydrocarbon films as it was partially possible to simulate the interior of planets (as ice giants not only contain carbon and hydrogen but also a vast amount of oxygen)

An efficient laser shoots ten flashes per second at a PET film, which is illuminated by the beam at intervals of a tenth of a second. The nanodiamonds produced in the process shoot out of the film and land in a collecting tank filled with water. There they are decelerated and can then be filtered and effectively harvested. The essential advantage of this method in contrast to production by explosives is that “the nanodiamonds could be custom cut about size or even doping with other atoms,” Dominik Kraus says. “The X-ray laser means we have a lab tool that can precisely control the diamonds’ growth.”

“Up to now, we used hydrocarbon films for these kinds of experiments,” explains Dominik Kraus, a physicist at HZDR and professor at the University of Rostock. “And we discovered that this extreme pressure produced tiny diamonds, known as nanodiamonds”. “The effect of the oxygen was to accelerate the splitting of the carbon and hydrogen and thus encourage the formation of nanodiamonds,” says Dominik Kraus, reporting on the results. “It meant the carbon atoms could combine more easily and form diamonds.”

Wavelength (TEM) Calculator – Electronics For You