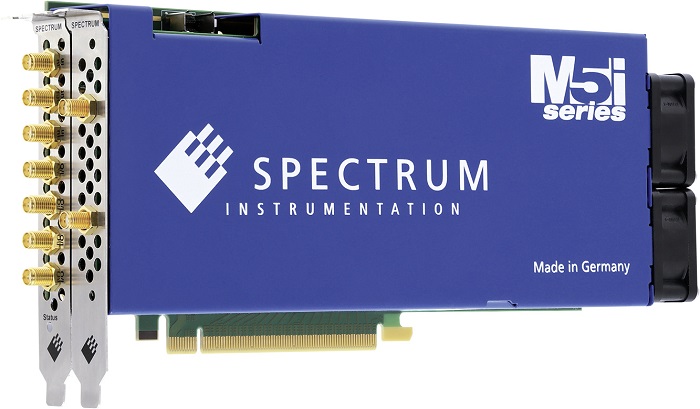 The release of two new PCIe Digitizer cards from Spectrum Instrumentation brings next-generation performance to PC-based instrumentation. Using 16-lane, Gen 3, PCIe technology, the cards are capable of streaming acquired data over the bus at a staggering 12.8 GB/s. That is nearly twice as fast as any other PCIe Digitizer currently on the market. Furthermore, it allows the cards to continuously run at their maximum sampling rate of 6.4 GS/s, with 12-bit resolution, and transfer the acquired data directly to PC memory for storage, or even to CPUs and CUDA-based GPUs for processing and analysis.

The new products include the model M5i.3330-x16, a single channel card that can sample at rates up to 6.4 GS/s, and the M5i.3337-x16 (pictured), a dual-channel card that offers synchronous 3.2 GS/s sampling on both channels, or the full 6.4 GS/s on a single channel. With 12-bit resolution, these fast digitizers offer exceptional dynamic range. It is up to sixteen times better than most digital oscilloscopes or comparable 8-bit digitizers. The extra resolution improves voltage measurement precision and allows users to capture and characterize fine signal details that are often missed by lower resolution devices. Timing measurements are also exceptional thanks to a PLL-based internal clock that has better than 1 ppm accuracy.

Designed to handle a wide variety of signals, the cards feature fully functional front-end electronics with over 2 GHz bandwidth, programmable full-scale ranges from ±200 mV to ±2.5 V and variable offset. Large on-board memories make the capture of long and complex waveforms easy. A generous 4 GB (2 GSamples) of memory is provided as standard and can be optioned up to a massive 16 GB (8 GSamples) if necessary. Single-shot and multiple-waveform recording modes are supported, together with trigger time stamping. Multiple recording divides the on-board memory into segments and allows the acquisition of numerous events, even at very high trigger rates. It is perfect for situations like those encountered in serial bus testing, or in systems using stimulus-response processes, such as those found in LIDAR and RADAR systems. For added flexibility, the on-board memory can be used as a ring-buffer, working much like a conventional oscilloscope, or as a FIFO-buffer, for the continuous streaming of data to the PC environment.

Integration into almost any test system is simple as the front panel boasts SMA connectors for the channel inputs, clock and trigger inputs and outputs, as well as four multi-functional digital I/O lines. The extra clock and trigger connections make it possible to synchronize the cards with additional digitizers or other measurement devices.

Oliver Rovini, Chief Technical Officer at Spectrum, said “We’re excited by the release of these first products in our new M5i high-performance digitizer family. They bring to market a unique feature set that makes them ideal for situations that require high-frequency signal acquisition and analysis. For example, they’re perfect for capturing the signals found in fibre optics, mass spectrometry, semiconductor testing, RF recording and quantum technology, just to name a few applications. We’re also delighted by the data transfer speed these cards achieve. Shifting data at rates up to 12.8 GB/s to the latest processor (CPU and GPU) technologies opens up new applications where intensive signal processing is required. For instance, artificial intelligence (AI) systems are now using radio and microwave sensor technology for object detection and identification. This involves the capture and analysis of signals in the MHz and GHz ranges, and it results in the processing of vast amounts of information. Similarly, astronomers scan the skies to collect light or radio waves from distant celestial objects. The data volumes they collect are enormous and analysing it, to reveal the secrets of the universe, requires a huge amount of processing power. That’s where the faster bus on the M5i products is a game-changer. It allows continuous streaming of all the data directly to very advanced processing systems. No data is missed, and it can be processed as fast as it arrives. Faster data transfer also provides users with improved measurement speeds and that leads to better productivity, particularly for those running automated testing processes. And finally, there’s the enhanced resolution. This increases measurement precision and allows test engineers to run trials with tighter tolerances. In turn that enables better quality control!”

To verify the transfer speed of the new digitizers, the company ran the products in a variety of different PC platforms. The maximum transfer speeds were obtained using an AMD EPYC Model 7252 server processor. The company also tested, at full speed, direct RDMA data transfers from the digitizer cards to an Nvidia model P2000 GPU. The capability to stream data directly to a CUDA GPU with up to 5000 processing cores is possible using the company’s SCAPP (Spectrum’s CUDA Access for Parallel Processing) package, which is available as a low-cost option. SCAPP includes the necessary drivers for CUDA GPU support and allows users to develop their own processing routines. Working examples are also included for common functions like continuous averaging for noise reduction or FFTs for spectral analysis.

Installed in a PC, running a Windows or Linux operating system, the cards can be programmed using almost any popular language. This includes C, C++, C#, Delphi, VB.NET, J#, Python, Julia, Java, LabVIEW, and MATLAB. Each card comes with a software development kit that contains all the necessary driver libraries and programming examples. Alternatively, if customers don’t want to write their own code, the company has SBench 6. This powerful GUI provides full card control, along with a host of data display, analysis, storage, and documentation capabilities.

Like all Spectrum Instrumentation products, the cards carry a 5-year product warranty with free software and firmware updates, as well as customer support direct from the engineering team for the whole life of the product. The M5i.3330-x16 and M5i.3337-x16 digitizer cards are available from now on.