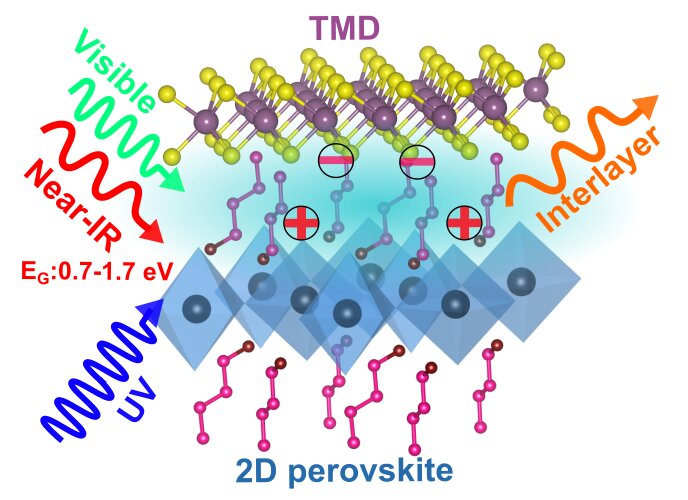 Assembling Lego-like, 2D heterostructures can give rise to emergent properties and functionalities very different from the intrinsic characteristics of the constituents.

One such family of 2D materials, the 2D perovskites, show interesting photophysical properties and better stability compared to the typical bulk perovskites. However, till now, near-infrared (NIR)/visible-range optoelectronic device performance metrics of 2D perovskites have been quite poor owing to certain intrinsic and materials-specific limitations such as large bandgaps, unusually high exciton binding energies, and low optical absorption.

A new study led by researchers from Monash University looks at a methodology to improve the optoelectronic device performance and extend the functionalities of 2D perovskites by conjugating them with optically active transition metal dichalcogenides (TMDs). 2D perovskites and TMDs are structurally dissimilar, however, they can form clean interfaces owing to van der Waals interactions between the stacked layers. Using accurate first-principles calculations, the authors demonstrate that the novel interface (band alignment) and transport properties are feasible in 2D perovskite/TMD heterostructures which can be widely tuned based on the appropriate choice of constituents.

To understand the interface properties accurately, the researchers created lattice-matched structures of the interfaces and explored their properties through highly memory-intensive computations using supercomputing facilities.

In specific systems, the predicted type-II alignments with NIR/visible bandgaps can enable enhanced optical absorption at comparatively lower energies. Also, sizeable band offsets and the possibility of interlayer excitons with lower dissociation energies can lead to easier interlayer separation of the excited charge carriers across two materials. These render the possibility of achieving higher photocurrents and improved solar cell efficiencies. The researchers also predict the possibility of type-I systems for recombination-based devices like light-emitting diodes and type-III systems for achieving tunneling transport. Additionally, they also show significant strain tolerance in such 2D perovskite/TMD heterostructures, a pre-requisite for flexible sensors.

“Overall, these findings demonstrate that a computationally-guided selection of heterostructures could offer better platforms than intrinsic materials for specific device applications and have potential in next-generation multifunctional devices such as flexible photosensors or LEDs,” says FLEET CI A/Prof Nikhil Medhekar who led the work with Ph.D. student Abin Varghese and postdoctoral researcher Dr. Yuefeng Yin.

Exploring the physics of 2D heterostructures further, the team collaborated with experimentalists led by Prof. Saurabh Lodha from IIT Bombay, India to explain the emergence of yet undiscovered optoelectronic phenomena. In the first work on WSe2/SnSe2 heterostructures, upon illumination, the polarity of the photocurrent showed a dependence on the type of electrical transport (thermionic or tunneling) across the interface of the heterostructure.

The researchers at Monash employed density functional theory based on electric field-dependent band-structure calculations and attributed this observation to the nature of band alignment at the interface. Together, they showed that a change in band alignment from type-II to type-III resulted in a change in polarity of photocurrent from positive to negative.

These studies demonstrate new methods to control the sensing mechanism in photodetectors which have not yet been studied in such detail.