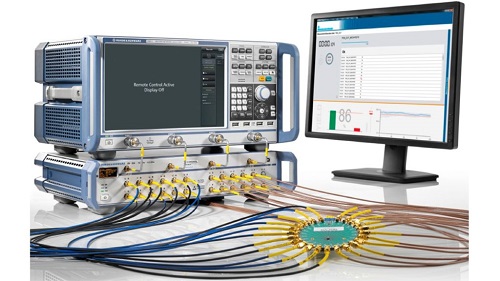 With the inception of Industry 4.0, and the increase in IoT, AI, etc. data consumption has skyrocketed throughout the globe. An increase in demand has directly impacted the increase in the number of data centers, therefore, the increase in the installation of the transmission lines. The company claims that the direct attach copper (DAC) cables are the best-suited solution for short-distance connections as they are the most economical for high-speed networks and connections within the data centers. The high number of installed DAC cables in larger data centers makes it impractical to be tested manually. The company claims the two software for IEEE 802.3 cable assemblies allow for precise and time-saving compliance tests of high-speed cables and backplanes. The R&S ZNrun vector network analyzer automation suite controls a vector network analyzer and a switching solution from Rohde & Schwarz to provide automated testing of high-speed Ethernet cable assemblies, considerably reducing the testing time and potential errors compared to manual Ethernet cable assembly test methods.

The company claims that the software is able to reduce the overall test time by employing automating measurement, Pass/Fail and margin analysis along with postprocessing of Channel Operating Margin (COM) and Effective Return Loss (ERL) results, and the generation of the test report. The more advanced R&S ZNrun is capable of testing assemblies following the IEEE 802.3ck Ethernet standard, which includes data transfer rates of up to 800Gbps for 800GBASE-CR8 configurations.

California based Fisker to set up India headquarters in Hyderabad • EVreporter

“Production-ready Accelerated Applications Made Under 1 hour” – Electronics For You