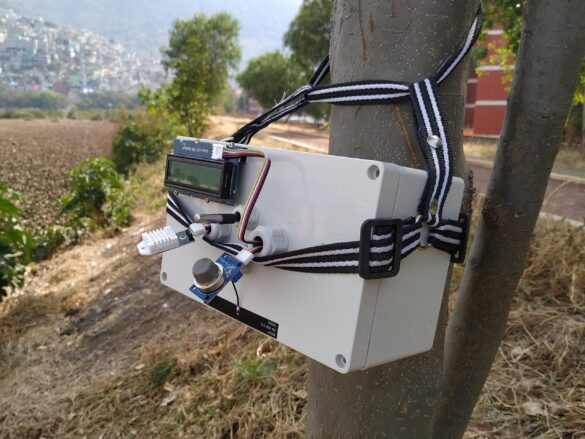 The scourge of air pollution claims several million lives globally each year, with industrial processes and energy production accounting for much of it. Because of its harmful nature, governments often set up air quality monitoring stations, although they have to cover large areas and yield low resolution data. To monitor the air quality of a neighboring ecological reserve, Guillermo Perez Guillen created a small, portable toolkit that can record data from almost anywhere and send it to the cloud.

Guillen’s system relies on two Arduino MKR WAN 1300 boards, which communicate with each other over the LoRaWAN long-range network, along with a Nano 33 IoT for sending the received data to a web API endpoint over WiFi. The transmitting MKR WAN 1300 is connected to a suite of sensors that measure temperature, humidity, carbon dioxide, carbon monoxide, and volatile organic compounds (VOCs) in the air. Then, at preset intervals, each sensor is read and the resulting measurements are sent to an awaiting receiver MKR WAN 1300 board.

Once the data packets have arrived, they are decoded and displayed on an attached 20×4 character LCD, as well as being sent over UART to a Nano 33 IoT. From here, values are written to a Thingspeak channel so they can be tracked over time. More information about this project can be found on Instructables.

Add a scale to your bike repair stand | Arduino Blog