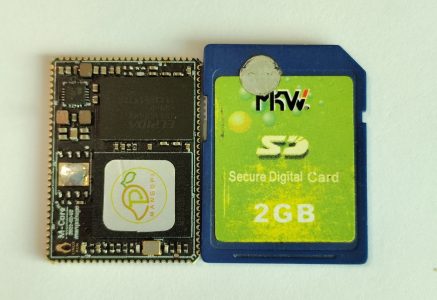 In a post on Twitter, MangoPi announced its new SD card-sized device that’s smaller than the smallest Raspberry Pi. The device which is still unnamed features a Linux-capable SoC, and has no ports. Hence, an external carrier board will be required for programming and interfacing. This carrier board can be seen in the images released by MangoPi. The Twitter post also specifies that the board can run 1080p video at 60Hz over HDMI.

According to the photos MangoPi released, here are some features of the device:

The most notable advantage that this board will provide is the capability to make more advanced IoT devices thanks to its form factor. This device will heavily benefit the wearable electronics industry, since wearables require the size and weight of the system to be as small as possible. Moreover, having Linux capability in a device as small as an SD card is remarkable.

The board isn’t available for sale, since it is still being experimented on. MangoPi hinted in its Twitter post that it will be testing out the Armbian operating system next. It’s possible that the board will be called the ‘Linux Box,’ as the Mango Pi website has a blank product page with that name and there’s talk about it on their forum.

Artificial Cilia To Control Fluids At The Microscale – Electronics For You

“Production-ready Accelerated Applications Made Under 1 hour” – Electronics For You