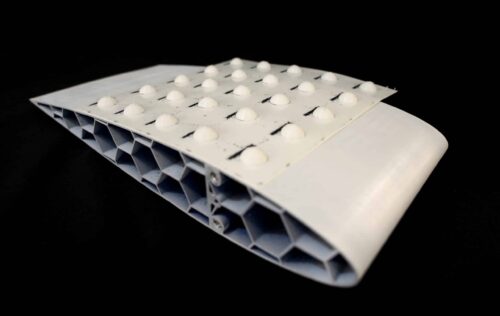 Researchers have developed a small retractable dome inspired by soda’s to-go cup lid, arranged in the form of an array to provide memory cues to a drone wing for dangerous conditions

The efficiency of drones is affected due to the problem called “data drowning’ as too much data from their sensors affects the full flight capability. This prevents them from flying safely in certain situations. To overcome this issue, researchers have developed a specific combination of domes, inspired by a to-go cup lid that pops up and down at specific parts of wings to indicate to the drone’s control system that the drone wing is encountering a threatening pressure pattern.

“A specific combination of domes popping up and down at certain parts of the wing, for example, could indicate to the drone’s control system that the Electronics dangerous pressure pattern. Other dome patterns could signify dangerous temperatures or that an object is approaching, “Arrieta said.

Electronics are designed in such a way that they can save and retrieve images by encoding information in patterns of black or white pixels as zeroes or ones. As this dome consists of only two states—popped up or popped down—these states can act like zeroes and ones to create spatial patterns for building associative memory. Researchers showed in the study that when a certain level of force inverts a dome, sensors embedded into the flat part of a metamaterial sheet surrounding the dome detect the change in shape. An electrical signal then triggers a memory device called a memristor to record the force and where it was detected on the sheet. With each instance of an inverted dome, the metamaterial learns to remember the pattern that a certain level of force creates on its surface.

The metamaterial can be manufactured with any of the existing methods. Arrieta said that these domes can easily cover a large surface area, like a drone’s wing. Furthermore, the researchers are planning to test how the material responds to its surroundings based on the information it learns from the domes. Arrieta anticipates that it will be possible to build a drone wing using this material design in the next three to five years.