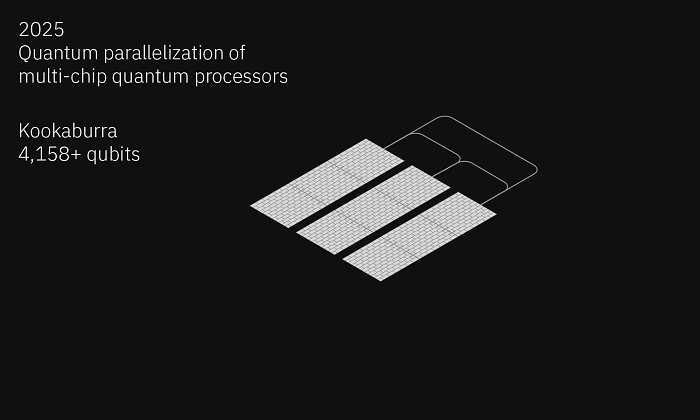 IBM today announced the expansion of its roadmap for achieving large-scale, practical quantum computing. This roadmap details plans for new modular architectures and networking that will allow IBM quantum systems to have larger qubit counts – up to hundreds of thousands of qubits. To enable them with the speed and quality necessary for practical quantum computing, IBM plans to continue building an increasingly intelligent software orchestration layer to efficiently distribute workloads and abstract away infrastructure challenges.

IBM’s work to usher in an era of practical quantum computing will leverage three pillars: robust and scalable quantum hardware; cutting-edge quantum software to orchestrate and enable accessible and powerful quantum programs; and a broad global ecosystem of quantum-ready organizations and communities.

“In just two years, our team has made incredible progress on our existing quantum roadmap. Executing on our vision has given us clear visibility into the future of quantum and what it will take to get us to the practical quantum computing era,” said Darío Gil, Senior Vice President, Director of Research, IBM. “With our Qiskit Runtime platform and the advances in hardware, software, and theory goals outlined in our roadmap, we intend to usher in an era of quantum-centric supercomputers that will open up large and powerful computational spaces for our developer community, partners and clients.”

IBM originally announced its quantum roadmap in 2020. Since then, the company has delivered on each of the targets on its timeline. This includes IBM Eagle, a 127-qubit processor with quantum circuits that cannot be reliably simulated exactly on a classical computer, and whose architecture laid the groundwork for processors with increasingly more qubits. Additionally, IBM has delivered a 120x speedup in the ability to simulate a molecule using Qiskit Runtime, IBM’s containerized quantum computing service and programming model, compared to a prior experiment in 2017. Later this year, IBM expects to continue the previously laid out targets on its roadmap and unveil its 433-qubit processor, IBM Osprey.

In 2023, IBM will progress on its goals to build a frictionless development experience with Qiskit Runtime and workflows built right in the cloud, to bring a serverless approach into the core quantum software stack and give developers advanced simplicity and flexibility. This serverless approach will also mark a critical step in achieving the intelligent and efficient distribution of problems across quantum and classical systems. On the hardware front, IBM intends to introduce IBM Condor, the world’s first universal quantum processor with over 1,000 qubits.

“Our new quantum roadmap shows how we intend to achieve the scale, quality, and speed of computing necessary to unlock the promise of quantum technology,” said Jay Gambetta, VP of Quantum Computing and IBM Fellow. “By combining modular quantum processors with classical infrastructure, orchestrated by Qiskit Runtime, we are building a platform that will let users easily build quantum calculations into their workflows and so tackle the essential challenges of our time.”

With this new roadmap, IBM is targeting three regimes of scalability for its quantum processors.

The first involves building capabilities to classically communicate and parallelize operations across multiple processors. This will open the avenue to a broader set of techniques necessary for practical quantum systems, such as improved error mitigation techniques and intelligent workload orchestration, by combining classical compute resources with quantum processors that can extend in size.

The next step in delivering scalable architecture involves deploying short-range, chip-level couplers. These couplers will closely connect multiple chips together to effectively form a single and larger processor and will introduce fundamental modularity that is key to scaling.

All three of these scalability techniques will be leveraged toward IBM’s 2025 goal: a 4,000+ qubit processor built with multiple clusters of modularly scaled processors.

Building the Fabric of Quantum-Centric Supercomputing

In tandem with hardware breakthroughs, IBM’s roadmap targets software milestones to improve error suppression and mitigation. Current progress being made with these techniques is improving the ability of quantum software to minimize the effect of noise on the users’ application and is paving the path toward the error-corrected quantum systems of the future.

Earlier this year, IBM launched Qiskit Runtime primitives that encapsulate common quantum hardware queries used in algorithms into easy-to-use interfaces. In 2023, IBM plans to expand these primitives, with capabilities that allow developers to run them on parallelized quantum processors thereby speeding up the user’s application.

These primitives will fuel IBM’s target to deliver Quantum Serverless into its core software stack in 2023, to enable developers to easily tap into flexible quantum and classical resources. As part of the updated roadmap, Quantum Serverless will also lay the groundwork for core functionality within IBM’s software stack to intelligently trade-off and switch between elastic classical and quantum resources; forming the fabric of quantum-centric supercomputing.

The new systems targeted on IBM’s expanded quantum roadmap will be designed to work within IBM Quantum System Two. Incorporating modularity and flexibility into every layer of the technology stack, IBM Quantum System Two will offer the infrastructure needed to successfully link together multiple quantum processors. A prototype of this system is targeted to be up and running in 2023.

Today’s announcement includes a commitment to extending IBM’s security leadership to take cyber resiliency to a new level and protect data against future threats that could evolve with expected advances in quantum computing. There is significant concern that data considered securely protected today could already be lost to a future quantum adversary if stolen or harvested now for future decryption. All data – past, present, and future – that is not protected using quantum-safe security may one day be at risk. It follows that the longer that the migration to quantum-safe standards is postponed, the more data remains potentially insecure.

IBM is home to some of the best cryptographic experts globally who have developed quantum-safe schemes that will be able to deliver practical solutions to this problem. Currently, IBM is working in close cooperation with its academic and industrial partners, as well as the U.S. National Institute of Standards and Technology (NIST), to bring these schemes to the forefront of data security technologies.

Additionally, IBM is announcing its forthcoming IBM Quantum-Safe portfolio of cryptographic technologies and consulting expertise designed to protect clients’ most valuable data in the era of quantum.

IBM’s Quantum Safe portfolio is intended to help our clients by providing: