Everything You Need to Know About BGA Soldering | Circuits Central 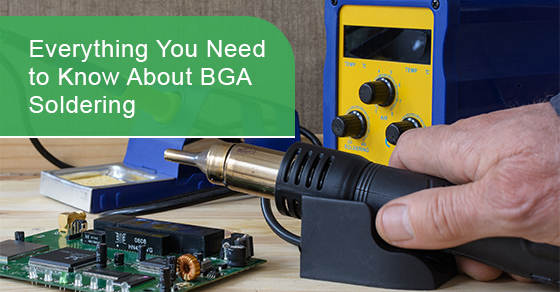 BGAs (Ball Grid Arrays) may initially seem difficult to solder because the solder balls are sandwiched between the BGA body and the circuit board. PCB assembly using BGAs, however, has proven to be successful. There may be a slight modification required to the soldering process and other parts of the PCB assembly, but BGAs have proven to be a very reliable and efficient technology.

Due to the significant increase in chip pin count, the Ball Grid Array, or BGA, was introduced. Carrier pins like those on the Quad Flat Pack became very fragile and easily damaged. In addition, the proximity of many leads made PCB routing difficult. Density problems with fragile chip leads were solved in one step by using the entire underside of the chip.

Many boards can be made more cost-effective by using BGA components, but care must be taken when soldering BGA components to make sure they are soldered correctly so that all joints are formed properly.

Ball Grid Arrays – what are they?

Ball Grid Arrays, or BGAs, are very different from pin-based packages, such as the quad flat pack. The pins of a BGA package are arranged in a grid pattern, hence its name. In addition, solder balls are used for the connections instead of the traditional wire pins. Copper pads are provided on the printed circuit board to provide the required connectivity to the BGA components. Compared to quad flat-packs, BGA packages offer many advantages, which is why they are used more often for electronics manufacturing.

Nearly all package pins are very close to one another on the quad flat pack, resulting in very high track densities around the package. By spreading the contacts over the entire surface of the package, the problem is greatly reduced.

Why are BGA Packages so robust?

Packages such as the quad flat pack have very fine pins, and even the best handling can damage them. Due to the pins’ extremely fine pitch, they are almost impossible to repair once bent. As BGAs use pads with solder balls on them, this does not occur since the connectors are very difficult to damage.

BGAs have a lower thermal resistance between silicon chips than devices that use quad flat packs. It enables heat generated in the integrated circuit inside the package to be conducted faster and more effectively onto the PCB.

Due to the conductors being placed under the chip carrier, high-speed performance is enhanced. Because of this, the chip leads are shorter. This lowers the lead inductance levels, enabling Ball Grid Array devices to offer a higher level of performance than their QFP counterparts.

The BGA solder technique has proven to be extremely reliable. Once the process is set up correctly, BGA solder reliability is usually higher than that of quad flat packs. In other words, BGA assemblies tend to be more reliable. Consequently, it is widely used in both mass production PCB assembly and in prototype PCB assembly for circuit development.

A reflow technique is used to solder BGAs. The whole assembly needs to be brought to a certain temperature to get the solder underneath the BGA components to melt. Only reflowing can accomplish this.

Solder melts in the soldering process when the BGA solder balls are heated, and they have a very carefully controlled quantity of solder. Surface tension holds the package correctly aligned with the circuit board as the solder cools and solidifies.

The alloy composition and soldering temperature are carefully selected to ensure the solder does not melt completely but remains semi-liquid, allowing each ball to stay isolated from its neighbours.

When BGAs were first introduced, there was great interest in the BGA inspection process. Using straightforward optical techniques to inspect BGA components is impossible since the solder joints are located beneath the BGA components and can’t be seen.

When BGA technology was first introduced, it created a good deal of unease, and many manufacturers conducted tests to ensure they were capable of soldering the components properly. With BGA components, the main issue is that sufficient heat must be applied to melt all the balls in the grid in a satisfactory manner.

Testing the electrical performance of solder joints cannot provide a complete picture of their performance. This form of BGA solder process test will reveal conductivity at the time, but it does not give an accurate picture of whether the BGA solder process was successful. An insufficiently made joint can fail over time if not adequately made. Only a form of BGA inspection using X-rays is suitable for this type of test.

By using X-rays for BGA inspection, the soldered joint can be easily inspected and tested. AXI became a popular technology for inspecting PCB assemblies that included BGAs after this development. Luckily, it has been discovered that the BGA components solder well once the heat profile for the solder machine is set up correctly.

BGA assembly rework is difficult unless the correct equipment is available. It is possible to remove a BGA component if it is suspected to be faulty. The component is locally heated to melt the solder underneath a BGA component. During the rework process of BGAs, the heat is generated from a specialized rework station.

A jig with an infrared heater, a thermocouple to monitor the temperature, and a vacuum device to lift the package. It is very important that only the BGA is heated and then removed.

A great deal of success has been achieved by the BGA technology in general and the BGA soldering process since they were first introduced. PCB assembly systems are now integral to mass production and prototype PCB assembly in most companies.

Alternate Powertrain Options and their Status in India • EVreporter

Everything You Need to Know About PCB Colours | Circuits Central