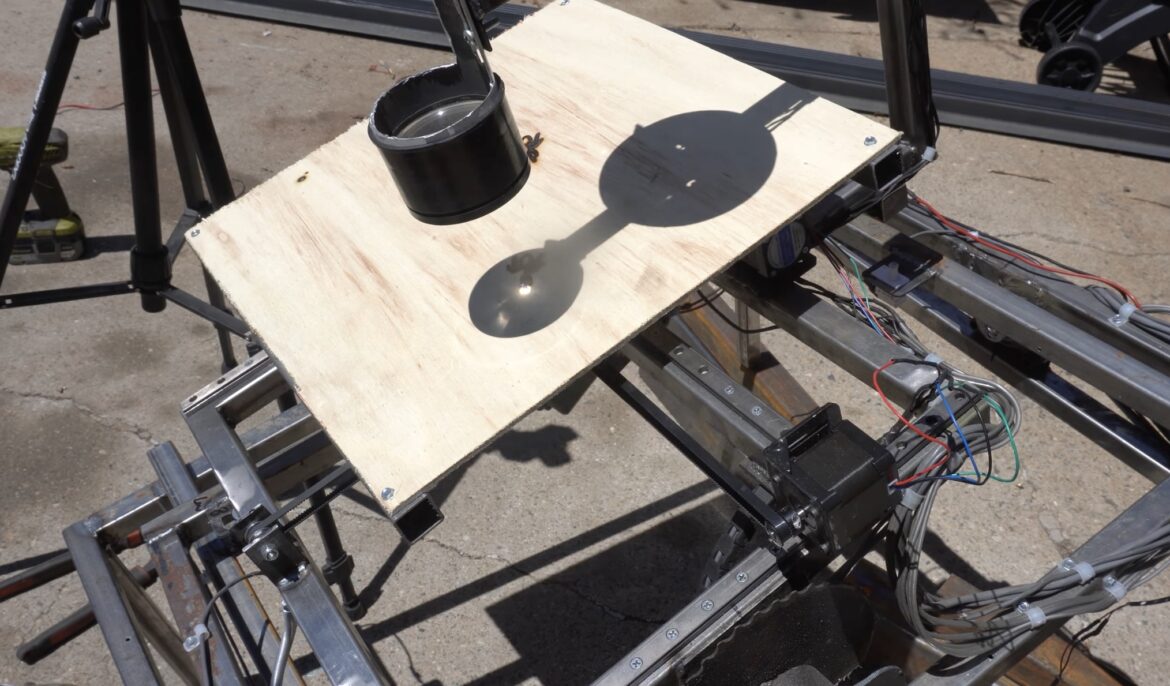 Usually when we use the term “solar power,” we are referring to indirect energy use: photovoltaic solar panels collect energy from the sun and then either pass it along to a device or store it for later use. But some systems can use power from the sun in a more direct manner. If you’ve ever used a magnifying glass to set fire to a twig, you were using solar power directly. YouTuber Cranktown City pushed that concept further and created an Arduino-controlled CNC engraver that takes advantage of solar power.

This machine doesn’t use energy from the sun to run the gantry motors or even the Arduino Uno board. Instead, it uses the sun and a glass lens in place of a conventional laser. Laser engravers are expensive because of the laser tubes, optics, and power supply. By replacing all of those with the sun and cheap lens, Cranktown City was able to engrave wood by burning it while saving a lot of money. He just needed a way to harness the sun’s energy and direct it with moderate precision.

As with a standard laser engraver, the focused beam of light from the sun needed to move in two axes relative to the workpiece. Cranktown City chose to move the workpiece itself, so he wouldn’t need to worry about losing focus with the sun. For that, he used his own custom CNC controller and motors on a welded steel frame. To keep the sun in focus and perpendicular to the workpiece, he used an Uno and four photoresistors.

The photoresistors sit in a + shaped shroud for isolation from each other. The Arduino takes readings from each to determine which receives the strongest light and which receives the weakest light. Based on those readings, it uses a pair of motors (driven through custom relay-based H-bridges) to reorient the entire machine and track the sun. This way, the machine always remains perpendicular to the sun’s rays in order to maximize the engraving power. As you can see in the video, it is slow but quite effective.