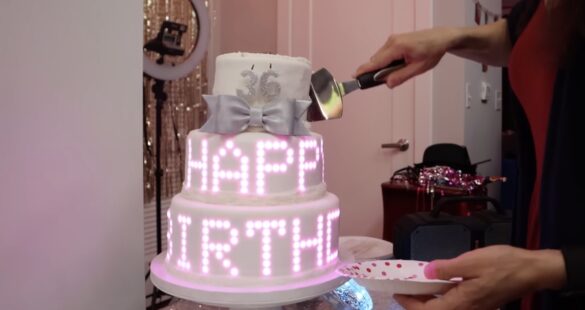 A good birthday cake is all about the decoration. Usually that comes in the form of fancy frosting, fondant flourishes, and crazy candles. But what if you got electronics involved? That’s the question Natasha Dzurny answered when she used an Arduino to bring a birthday cake to life with epic LED lighting.

WS2812B individually addressable RGB LEDs, commonly referred to by Adafruit’s “NeoPixel” trade name, are unique because a user can control the color and brightness of every LED in a chain through a single data wire. Each LED passes the data along to the next, with control commands going to the addressed LED. The user can control as many LEDs as they want using only a single digital I/O pin on a microcontroller.

In this case, Dzurny used two Adafruit 8×32 flexible NeoPixel matrices and a NeoPixel strip. The matrices display animations and messages, while the NeoPixel strip sits atop the cake to accent a small disco ball. An Arduino Nano 33 IoT board controls all of those LEDs using the Adafruit GFX library. But while hundreds of LEDs can share a single data line, power distribution is more complicated and Dzurny had to break out power injection points.

The cool thing about using NeoPixel matrices for a cake is that Dzurny was able to cover them in a thin layer of white fondant, which acts as a natural diffuser that blends right into the design. The messages are clearly visible, but party-goers wouldn’t even notice the LEDs underneath the fondant when they’re turned off.